In 1979, Hamilton received a grant from the Pew Charitable Trust to establish an interdisciplinary program in Public Policy. The fledgling program was designed to encourage students and faculty members to use the three disciplines of economics, government, and philosophy in analyzing specific public policy issues.

It thus sought to strengthen students’ educational experiences and better prepare them for lives of active citizenship. Although the public policy program was a natural evolution for Hamilton — a college with a long tradition of preparing its graduates for public service — its very existence recognized the growing national need for post-secondary education to respond to the increasing complexities of national, state, and local public policy issues. 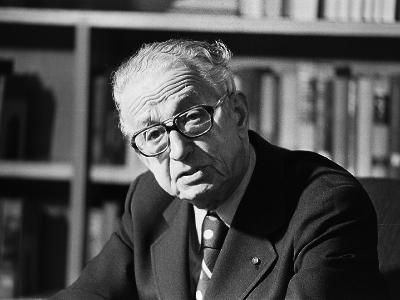 A year later, in 1980, the family of the late Arthur Levitt, to honor him as a long-time New York State public servant, made a significant commitment to Hamilton to establish the Arthur Levitt Public Policy Center. Elected Comptroller six times — the last time by the largest plurality ever recorded in a New York State election — Mr. Levitt was awarded an honorary Doctor of Laws by Hamilton College in 1979 for his “peerless reputation and efficiency in an office where corruption and confusion had been known to flourish.” His retirement in 1978 ended a 24-year term that is the longest in the 175-year history of that office. His son, Arthur Levitt, Jr., received an Honorary Doctor of Laws from Hamilton in 1981, the same year in which his daughter, Laurie Levitt, graduated from the College.

The establishment of the Arthur Levitt Public Affairs Center gave substance to the study of public policy on the Hill. More than a quarter century later, the Levitt Center supports initiatives and provides resources that enable students and faculty to engage in public service and public policy through research, service-learning, lectures, discussion, and practice. Levitt Center programming is open to students and faculty across all disciplines and departments and is organized around programs that encourage interdisciplinary collaboration and discussion, as well as innovative and positive social change.